Bunker Garages of the Southside

Have you ever noticed all those cavelike garages built into the hills along Southside streets? 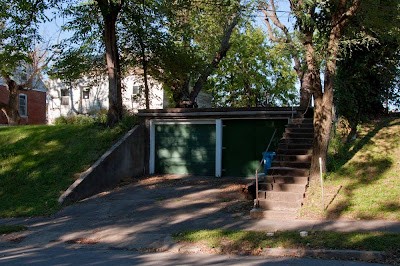 Before cars, houses in the Southside didn’t need driveways. Horses and carriages reached the back sides of properties by using the alleys behind the houses.

But when people started to have cars, there wasn’t enough space between houses for driveways on the narrow lots, so people built garages on the back ends of their lots and used alleys to drive their cars into them. One example is the sturdy concrete garage behind the Joseph Pope house (now Rosewood Music), at 222 West Dunklin. 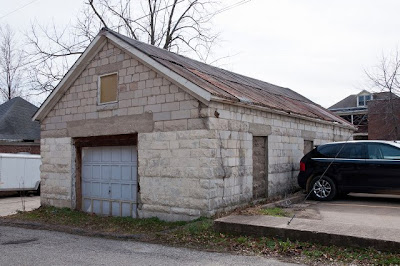 Automobile traffic required cutting down steep hills to a lower grade. This caused houses, originally built at street level, to sit ten to twenty feet above the new street level. Rock walls were constructed on many hills to support the new terraces. A long flight of stairs led up to each house. When the street was lowered in the 800 block of Mulberry in 1912, the newspaper reported that Adam Deeg jokingly contemplated dividing his house. That is, he would cut off the part that hung high above the street and move it around to the back side of the building.

Creative homeowners turned the negative into a positive by digging into the high terrace in front of their houses to make underground or bunker garages for their cars. The 800 block of Mulberry has several prominent bunker garages below the houses. 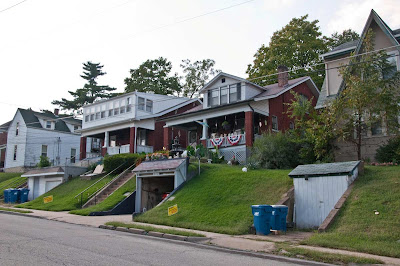 The bunker garages were built to accommodate cars of Model T vintage, so they are generally too small and unsuitable for today’s cars. Now, these bunker garages are mostly used for storage, and cars are parked on the street.

Before the 1920s, West Dunklin Street stopped abruptly at a “dead end” barrier in the 300 block in front of what is now Kas A Designs jewelry store. A steep bluff with a small creek at its base prevented horses and buggies from going any farther west.

Pedestrians used a long flight of wooden steps to negotiate the bluff. One day the city was slapped with a lawsuit when a Mrs. Kingery fell off that long stairway. The rotten banister had given way, and “she was precipitated headlong into the washout below.” The city then decided to put Dunklin Street through to connect the Southside with the new Washington Park subdivision, along what is now Missouri Boulevard. After the bluff was cut down, the houses ended up twenty feet above the street. A bunker garage was built into the fifteen-foot terrace at the Schneider House, now Kas A Designs (308 West Dunklin). 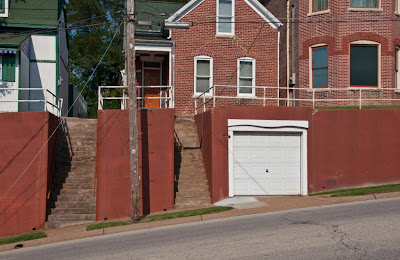 Construction of bunker garages was possible because the properties were underlain by great depths of either wind-blown loess or alluvial material, which was easy to dig out without disturbing the house foundations.

However, where properties were underlain by solid bedrock—as at the intersection of Monroe and East Dunklin (near the Jefferson City Public School Administration Building)—the cost of excavating into the hillside was much too expensive without explosives. And explosives would have damaged the house above. Those homeowners had to find someplace else to park their cars. 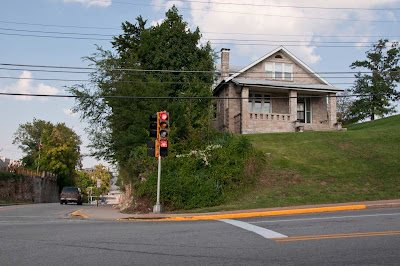 Special thanks to Susan Ferber, who took all the great photographs!

Posted by Julianna Schroeder at 6:02 AM