The Broadway Street sextuplets are at least 110 years old this year! Six nearly identical houses are located in a half block of Broadway, at numbers 711, 713, 715, 717, 719, and 721. Passersby notice their similarity even at a glance! The sextuplets were built at the beginning of the nineteenth century and by 1908 all had been occupied as rental residences of Southside families of modest incomes. In time, they were sold to individual owners. 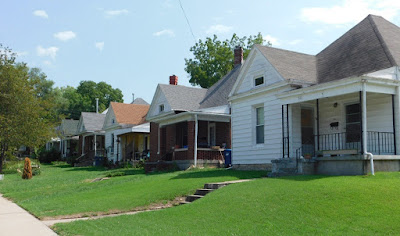 The six were built before cars were planned for by homebuilders, resulting in them being so closely set on 30-foot-wide lots that the few feet between them allows no space for a driveway. Instead, when their inlot (901) was subdivided, a 10-foot-wide alley was designated behind all of them, from Tanner Way to Ashley Street. The alley—originally used for horses and wagons—still gives the residents access to the back of their narrow properties. Each lot had a wagon shed, now a garage, in the rear. The two houses on the ends were built slightly larger on their back sides than the other four.

The six are styled like many other small houses for working-class families at that time in Munichburg. Each is a red brick, one-and-a-half-story structure with stylized window framings and doorways. Each has a gabled projection on its north side that is complemented by a small inset porch on the south.

Just as human sextuplets will evolve different personalities as they mature, these architectural siblings, under individual ownerships, have also evolved differently over the decades. Some have been enlarged by second-floor rooms, and some have new siding, new porches, or additions in the back. As property values are increasing in Munichburg, several of the sextuplets are being updated and renovated to be comfortable, small, owner-occupied residences or investment properties. Their original similarity as sextuplets continues to attract the attention of people passing by.

This piece originally ran in the Jefferson City News Tribune as an ad for Oktoberfest on September 9, 2018.