Few know the story of the gray apartment building on the southwest corner of Broadway and Elm. It begins with Daniel Gundelfinger, son of Bavarian immigrants and well-known High Street hardware merchant. He built it as his home in 1892, three years before the Herman Tanner residence on the south end of that block was built. The newspaper said the two houses were “very elegant,” noting that they bookended what was becoming “one of the [city’s] most impressive residential blocks.” The spacious, two-story brick Gundelfinger home had a deeply recessed, arched entrance on Broadway; prominent stone lintels; ornate, dentiled cornices; mansard roof with decorative metal parapet and a hexagonal turret; and two huge metal urns flanking the entrance that identified it as a hardware merchant’s home. 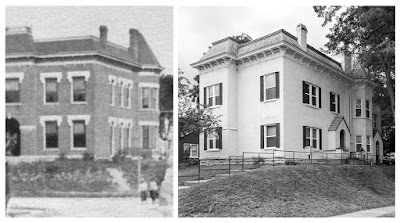 All the other houses in the 600 block postdate the Gundelfinger house and are now on the National Register of Historic Places, but the Gundelfinger house is not. Daniel built the house for his wife, the Bavarian-born Margaretha Hoehler (age 17 when married), and the happy couple moved in. But she became seriously ill, and in a few months, in 1893, she died. Her funeral was held in the parlor of the new house.

Daniel then married Bertha (Bessie) Roesen in 1895, and family life resumed in the big house; they had two sons in short time, Daniel W. and Karl H. But tragedy struck again: in July 1906 a probate jury declared Daniel of “unsound mind and incompetent of conducting his affairs.” He was committed to the State Hospital in Fulton and died there in November 1907. What would become of Daniel’s dream house?

The Roesen family was intermarried with the Moerschels, who had the big Capitol Brewery. Brewery owner Jacob Moerschel lived in the Gundelfinger house while he was building his Villa Panorama mansion on Swifts Highway in 1907–1908. A much smaller home was built on the property, 602 Broadway, for Bertha and sons. (Now it’s a driveway.) In 1916 the “Bertha Gundelfinger property” (two houses at 600 and 602 Broadway) was sold for $2,500 to neighbor Nelson C. Burch. The widow moved to rural Columbia to live with her son Karl, who, incidentally, committed suicide at age 44.

Between 1931 and 1935 the Gundelfinger house was transformed from a spacious single-family residence into four apartments. The Broadway entrance was eliminated, and a new, pointed-arch, canopied entrance was opened facing Elm Street to access the two apartments on each floor. The lintels were removed and all windows made smaller, changing its appearance from Victorian to Craftsman. The mansard roof, dentiled cornice (minus parapet), and turret were retained. Also, a two-story addition was fused to the back of the house, with a matching pointed-arch, canopied entrance for the two new apartments.

Today, the six-apartment Gundelfinger Building looks as if it has been this way all along, but its history is betrayed by the roofline—the addition lacks a mansard roof. The building’s address was changed from 600 Broadway to 301 and 301½ W. Elm. The original brick exterior was faced with tan stucco, mirroring the tan stucco just added to the catty-corner brick German Methodist Church building that had also been converted into apartments. The Gundelfinger’s stucco has since been painted gray. 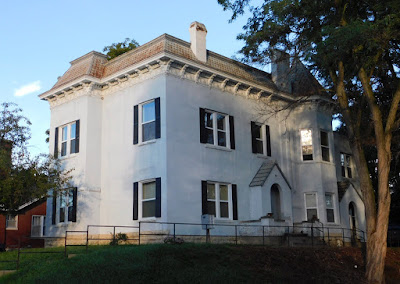 Since the 1930s the apartments have served as rental residences of Missouri state office professionals, including an assistant attorney general, lawyers at the Supreme Court, state representatives, and professionals with the Tax and Public Service commissions, State Auditor, Education and Revenue departments, Board of Health, and Missouri Highway Patrol.

The 126-year-old building is now owned by Matt Holland and Eric Hemeyer (H&H Property Management), who are renovating it inside and out to make it once again a sought-after residence in Munichburg, Jefferson City’s historic Southside.

This piece originally ran in the Jefferson City News Tribune as an ad for Oktoberfest on September 23, 2018.