The Brewery and Ice House

When I was growing up in the 1940s, the biggest building in Jefferson City’s Southside was the brewery, where the Moerschel family made Capitol Beer. At the time, it was the only brewery in Jefferson City. 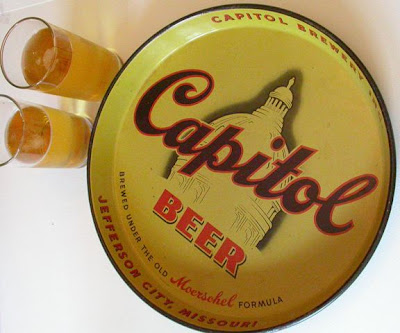 It was actually a group of buildings on the east side of Washington, extending from Dunklin back to the alley (now Cedar Way). The alley is about ten feet lower than the bordering streets. The brewery was just around the corner of Washington from our house on Elm Street. On the Washington Street side of the brewery were two deep wells, dug before Jefferson City had a public water supply. Jefferson City beer was made with well water from limestone rocks, not Missouri River water! Mom said that when she was a girl around 1915, when homes had no cold water, she would go to those wells, which always had water flowing out of the top of them, and get a drink of cold well water on hot summer days.

Since, as a kid, I had nothing to do with beer, the brewery itself meant little to me, except for the powerful smell on days when hops and other grains were being cooked. You could smell it all over the Southside. The four-story brew house faced on the alley, which we called “the brewery alley.” The alley was the route I took to get to important places for boys like the Southside Drug Store and Central Dairy. The loading platforms were there too, with trucks coming and going, so I was able to watch a lot of action when I passed by.

Much more important to all of us kids was the brewery’s ice house that sat right on the Dunklin Street brick sidewalk. Also owned by the Moerschels, the ice house provided the whole city with ice. They ice house also had stalls where local grocery wholesalers could keep quantities of meat and fresh produce in storage. People who had ice boxes instead of refrigerators for keeping food cool had square-foot signs that they put in their front windows to signal the deliveryman in the street how much ice to leave on delivery day. The sign had four large numbers—25, 50, 75, 100—along each of the four sides of the square, and the family rotated it so that the number for the size of ice block to be delivered would be at the top of the sign and visible from the street. Some families on Elm Street had ice delivered for their ice boxes, and when the ice truck stopped on our street on hot summer days, it was a signal for all the kids to come out from wherever they were and get pieces of ice from the truck. The young deliveryman sometimes chipped off some ice if there weren’t enough chips already in the truck bed to go around.

Whenever we passed the ice house on hot days we looked for pieces of ice. Mr. Frank Wehmeyer sat out on the loading platform next to the brick sidewalk and joked with all the kids who passed by. Crushed ice was packed in two-layer paper bags, and you could put a quarter in a slot, push a button, and a big bag came rumbling down a hidden chute, then popped out through a window with rubber flaps onto the loading platform. You had your choice when making homemade ice cream: you could get crushed ice in the bag or you could buy a block, take it home, and chip it yourself with an ice pick. Chipped ice, which was thinner, packed better around the ice cream canister than crushed ice, which tended to be chunky. But it was less work to buy the crushed ice. If we got a block of ice, we put it in a burlap sack and two persons carried it home, each holding an end of the burlap sack. Otherwise we used my red wagon. Homemade ice cream was delicious! Folks all over the Southside made homemade ice cream using ice house ice.

The Moerschel Brewery, which began in 1892 (but it continued brewery operations on that site that began before the Civil War), ceased operation in 1947. That was sad for the Southside. The ice house stayed open longer, until 1972, when all the brewery and associated buildings were demolished. The deep wells were capped, and thousands of old bricks (some building walls were seven bricks thick!) and 20,000 cubic yards of dirt were used to bring the site up to Dunklin Street level. A new chain Safeway grocery store was built on the site. It is now a warehouse and parking lot for Prairie Farms (Central Dairy).

Read more about it! Breweries and Saloons in Jefferson City, Missouri, by Walter A. Schroeder, is now available from the Old Munichburg Association for $8 a copy. It’s full of information about Jeff City’s beer history: breweries, tap rooms, beer gardens, and the German immigrant culture that nurtured them.