When a Steamboat Docked on Dunklin Street

What? A steamboat in the heart of Munichburg? How could this possibly be?

It’s true, and here’s how it happened.

The Nieghorn family of Cole County has in its family history an intriguing story of German immigrants coming to Jefferson City in 1844. This story was told to me by Gary Schmutzler of Jefferson City, a Nieghorn descendant. Gary heard it from his great uncle Andy Nieghorn, who heard it from his immigrant grandmother Hartenstein. It’s so unusual that it could not have been made up.

The Nieghorns and Hartensteins were among the first Bavarian immigrants to Cole County farms. The Hartensteins came through the port of New Orleans, then up the Mississippi by steamboat, then up the Missouri, also by steamboat. For the Missouri River part of the trip, they traveled in small, short steamboats more like a river ferry, not monsters like today’s Delta Queen or Admiral. The immigrants had to come by river, of course, because Missouri had no railroads in the 1840s.

When they reached the little town of Jefferson City, barely twenty years old, the boat left the Missouri River, entered Wear’s Creek, and continued upstream into its East Branch to where Central Dairy facilities are now, and then it moved south one block to Dunklin Street. That would put the boat with its immigrants into what is today the low "backyard" of Busch’s Florist. This is what that area looks like today. 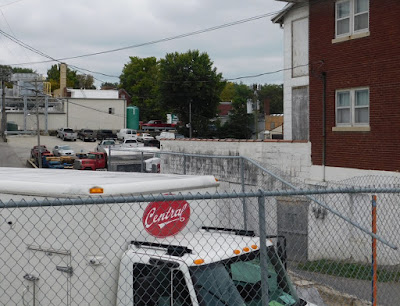 The immigrant Hartenstein party got off the boat, transferred to wagons, and traveled southwest overland a few miles to the Zion neighborhood, where they settled among Nieghorns and other German Lutheran immigrants and became farmers.

If that family account is to be believed, how can it be explained?

The family account says the Hartensteins arrived in 1844. In that year, according to the U.S. Army Corps of Engineers, the Missouri River experienced its greatest flood ever in recorded history, by volume of water. The Great Flood of 1993, though somewhat less in volume, actually rose higher because of later channel engineering and levees. But the 1844 flood happened before the river had been so deeply channeled and walled in. The floodwater created ten-foot-high sand dunes in the river bottoms, and the river channel changed its course in several locations. Historical records tell of river pilots navigating their steamboats over the tops of submerged trees and croplands in the Missouri River bottoms. 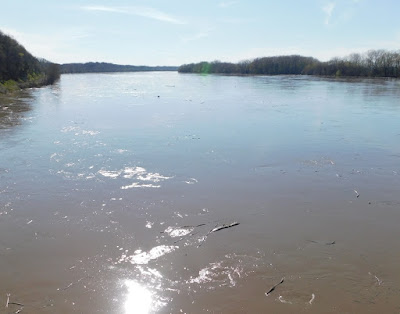 With the Missouri River at such a high flood stage, water backed up into Wear’s Creek, as it always does in any Missouri River flood. If you remember the Great Flood of 1993 in Jefferson City, you remember water backing up in Wear’s Creek and flooding the Capitol Plaza Hotel and the parking lots around it. In fact, river backwater continued upstream in the East Branch channel past Central Dairy and even beyond Monroe Street. So the boat carrying the Hartenstein family could have come up into the Southside using the quiet Missouri River backwater just like moving into the arm of a big lake. In 1844 there were no bridges over the creek, either for a railroad or for wagons. The creek was totally unobstructed and would have been open water. 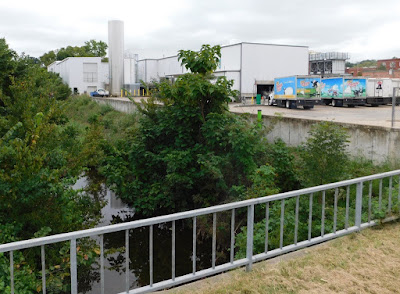 If you stand on the Dunklin Street sidewalk behind Busch’s greenhouse and lean over the railing, you will see how low the ground is there. 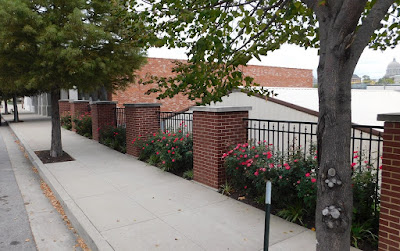 A small creek, visible in an 1892 photo, used to flow behind Busch’s greenhouse. Water from a flooded Wear’s Creek readily backed up into that low ground. In fact, the 100 block of East Dunklin, between Jefferson and Madison, was originally at that low level you see behind Busch’s. 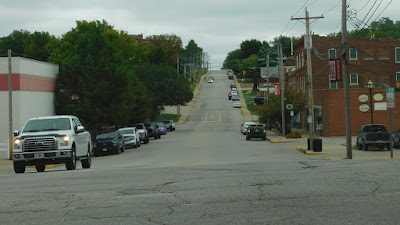 It wasn’t until 1912 that the city decided to fill in the north side of Dunklin ten feet or so, to build up the street and make it relatively flat in that block.

If you lean out over that sidewalk railing and look back under the Dunklin Street sidewalk, you will see the original 1912 limestone retaining wall the city built to hold up the dirt fill that Dunklin Street is built on. 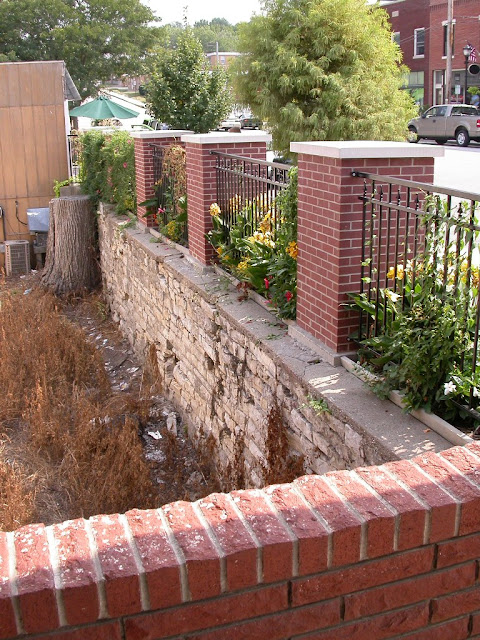 My conclusion is that the Nieghorn family story of the Hartensteins coming all the way to Dunklin Street by steamboat in 1844 is entirely believable. It shows that the stories we hand down from generation to generation may not be distorted or inaccurate retellings, tall tales, or figments of someone’s imagination, but actually could have happened, however unbelievable it seems at first.

But wait! There’s more to the story! When John Nieghorn (1819–1899), who came to Cole County about the same time as the Hartensteins, retired from his business as a tailor and farmer in the Zion community at age seventy-one, he came back to the same place on Dunklin Street where the Hartensteins disembarked from the boat in 1844. He built a three-story brick hotel there in 1892, called the Nieghorn Haus, and he spent his final retirement years living in it. 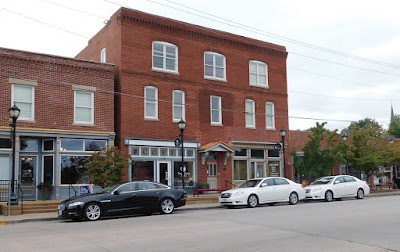 That hotel building, at 120-122 East Dunklin, and later called the Bassmann Apartments, was thoroughly renovated and updated by Phil Kolb and Steve Rollins in 2010 and is now on the National Register of Historic Places as the Nieghorn Hotel. Thank you, Nieghorns and Hartensteins, for giving us great Munichburg memories!

Posted by Julianna Schroeder at 4:13 PM No comments: