Below is the text and image for the "Munichburg Memories" ad that ran in the Jefferson City News Tribune on September 19, 2021, as a promotion for the Old Munichburg Association's annual Oktoberfest, which was held September 25.

The image is from the Missouri State Archives. To see it in more detail, click on it to enlarge it.

The intersection of Jefferson and Dunklin streets is Munichburg’s center. By 1873, Mauritz Laudel had a blacksmith shop on the northwest corner, catty-cornered from Farmers Home. Henry Schwartze bought Laudel’s shop before 1900 and turned it into one of Munichburg’s major businesses. Schwartze added wagon making and repairing, which became more important than the blacksmith business. The large, two-story brick building on that corner, still standing today, was erected in the 1890s, possibly in the 1880s. The photo, circa 1912, shows the wagon business occupying the ground floor; above, the large Schwartze family, who lived upstairs, are peering out the windows. The family had a separate recessed, arched entranceway on Jefferson Street. A separate paint shop was affixed to the north side on Jefferson Street in 1912. When autos began replacing horses and wagons, Schwartze—seeing the writing on the wall—moved his business to Vienna in rural Maries County in 1914.

In 1914, the building was completely renovated and repurposed for retail business downstairs and offices above. The original wide doorways were bricked in and replaced with new entrances and windows. The original limestone foundation was preserved. The former paint shop addition was also converted into retail space below and offices above, with separate entrances to both. Very important, the soft-brick exterior walls from the nineteenth century were covered with new wire-brushed, resistant brick to give the building the completely different appearance you see today that belies its age. The former paint shop was similarly rebricked. It was incorporated into the original corner building so seamlessly that the two buildings appear as one today, although at slightly different elevations.

The Southside Post Office (the city’s first branch post office) and Southside Drug Store were the first to occupy the renovated buildings, with doctor and dentist offices above. In 1921, the corner building became the ill-fated Cole County Bank, which was forced to close in 1938 during the Great Depression.

This more than 130-year-old building, now owned by Prairie Farms, is one of the signature historic buildings in the Southside. 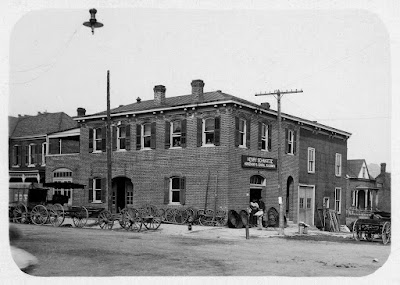 Posted by Julianna Schroeder at 1:23 PM No comments: