In the 1940s, when I was still in elementary school, my family did most of its shopping for clothes and household items on Dunklin Street in the Southside. Since we had no car, it was the nearest and quickest place to go, but more important than that, Mom and Dad knew almost all the store owners and clerks and felt comfortable trading with them. Many of the men and even some of the women who worked in those stores got their hair cut at Dad’s barbershop, and so we returned the patronage. Also, if necessary, we could charge things, with no interest to be paid on the balance. Store owners had a lot of trust in the goodness of the neighborhood people. They knew we would pay when we had the money.

We bought our shoes at Schmidt’s Shoe Store, 124 East Dunklin, in the middle of a block of small stores. Everyone knew Schmidt as Chicken Schmidt. Few people knew his real name, John. Upon entering the store you immediately faced a choice; a partition divided the store into two stores. On the right, Mrs. Edna Schmidt, Chicken’s wife, had a beauty parlor for neighborhood ladies. Boys never went into that side, although we could smell strange odors coming from the hot hair curling machines that women had attached to their heads for “permanents.” It was a bad chemical smell that you couldn’t ever forget, though you might want to. 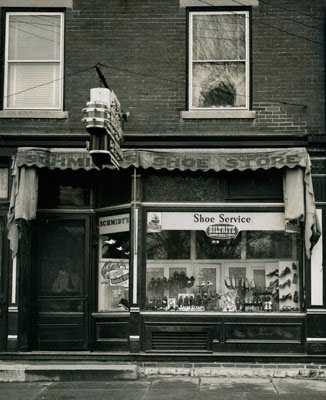 Schmidt’s Shoe Store, 124 E. Dunklin, ca. 1950.
Photo by Ralph W. Walker, used by permission of Al Case.
On the left, Mr. Schmidt had his shoe store. It was a long, narrow room made narrower by shelves along the walls that went up to the high, tin ceiling. Hundreds of boxes of shoes filled the shelves. To reach the upper shelves, Mr. Schmidt had a ladder on rollers, which slid along a rail near the ceiling. It would have been great fun to stand on the ladder while it rolled along the floor, but I never had the courage to ask Mr. Schmidt for permission to take a ride on his rolling ladder.

In the far back of the store was the shoe repair counter, where I had soles and heels replaced on my leather shoes. Leather shoes were the only kind of shoes we had, even children. Its shelves were lined with pairs of shoes, with tags, waiting to be picked up. The smell of hot leather was powerful. Sometimes when I entered the store, I heard Mr. Schmidt tacking on a new heel on a shoe placed upside down on a last, or the whirring sound of the pulley-mounted leather belt of his polishing machine. He looked up and saw me, and called out to me by my nickname, “Just a minute, Buddy!” He knew everyone in the neighborhood. 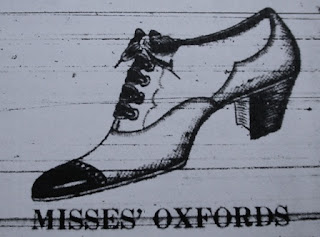 Shopping for shoes could be a bore at best, or a tribulation at worst, for a young boy, but Mr. Schmidt didn’t let it be. He joked with me and always had something to give me when we bought shoes. One year he gave to all neighborhood kids a tablet of white, ruled paper for school. It had holes punched in the margin so that it would fit in a notebook binder. The tablet had his name “Schmidt’s Shoe Store” on the blue cover, along with a picture of a grinning Buster Brown with his dog Tige. Mr. Schmidt sold the popular Buster Brown children’s shoes, made by the Brown Shoe Company in St. Louis.

Chicken Schmidt’s name draws laughs from people today. But when you grow up hearing a name from your earliest days, it is just another name. We didn’t ever think it was funny or wonder how he got it, so no one ever knew the origin or ever thought to ask him. Since there were so many Schmidts in the Southside, a nickname helped sort them out. For example, Chicken’s father was known as Hans, not John. Another Southside Schmidt was known as Sprudel Schmidt. Sprudel is German for carbonated water or soda. Yet another Schmidt, who had the saloon in the early Farmers Home Hotel, was known as Eisbär, or polar bear Schmidt. He had an oval wooden sign that hung out over the sidewalk with no words on it, just a painting of a big, white polar bear. 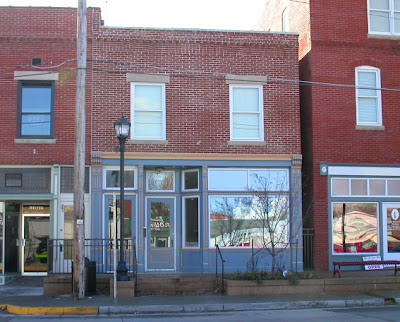 Chicken Schmidt’s Shoe Store, built ca. 1908, was beautifully restored in 2010 by Larry Kolb and Steve Rollins. The original tin ceiling, hardwood flooring, and the floor-to-ceiling oak posts are still there. The building is on the National Register of Historic Places.

We have a rich history here in Old Munichburg! Join the OMA and help great things to happen here in the twenty-first century!

Posted by Julianna Schroeder at 4:57 PM No comments: