On June 8, 2013, the Old Munichburg Association unveiled The Historic South Side Mural, which the group had commissioned local artist Jim Dyke to paint. The 48-feet-long mural is designed as a pair of panoramic streetscapes; it depicts the long history of the Munichburg neighborhood via an overlapping potpourri of images from different time periods.

The location of the mural, 117 East Dunklin Street in Jefferson City, originally held the residence of Hugo and Carolina (Lena) Busch and their family of ten children. Built around 1900, the modest-looking brick house was one and a half stories above the street, but it had a full lower floor because the land the house was built on lay ten to fifteen feet below the street level. The house was really a two-and-a-half-story house. It is prominently shown in the mural and labeled as the Busch house.

The building that the mural is in was put up in the 1950s by Milo H. Walz to house Missouri state offices. Later, it was bought by Central Dairy/Prairie Farms and converted into a warehouse, with the first floor removed so that now, if you were able to open the sealed front doors and enter, you would drop ten to fifteen feet to the ground below. The mural is installed in the windows of this 1950s building. This building is not shown in the mural. 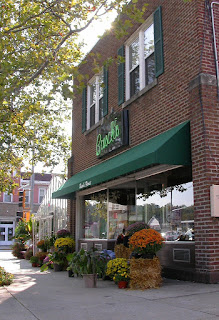 Hugo and Lena Busch, nineteenth-century German immigrants and members of Trinity Lutheran Church, were leaders in Muenchberg/Munichburg. In 1890, Hugo and partner Charles Purzner bought an existing florist and greenhouse on the corner of Dunklin and Madison. In 1902, Purzner sold his interest to Busch. Most of the ten children (eight sons, two daughters) worked in the business at some time, which was a tradition in Munichburg in those years.

The Busch family operated the business continuously until son Arthur Busch died in 1990 and widow Leota sold it in 1997. Reid Millard purchased the business in 2017 and retains the name “Busch’s Florist.” For more than a century Busch’s Florist has been Jefferson City’s premiere florist. The “Busch corner” of Madison and Dunklin is perhaps the most beautiful street corner in Jefferson City.

My mother liked pansies. In spring she always had pansies with their smiling faces in flower boxes at the front door. She and Grandpa sometimes called them by their German name Stiefmütterchen, or “little stepmothers.” 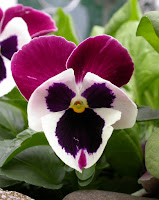 Pansies are hardy and among the first flowers to bloom in spring. Mom’s birthday was March 22, and it became a custom for me, when I was about eight to ten years old, to give her a dozen pansies for her birthday. I got them from Busch’s.

Mr. Hugo Busch, who by then was almost eighty years old, helped me out personally. His hot beds sat those ten to fifteen feet below the Dunklin Street sidewalk between the greenhouse on the corner and the Busch house on Dunklin. I went to them by walking down a ramp from the street sidewalk. The hot beds, each about eight feet square, were held in by 2 x 12 boards standing upright. The beds had heavy wood frames of glass panes for a cover, much like the roof panes of the greenhouse. The frames would be placed over the top of the beds in winter to protect against freezes. Mr. Busch set out his pansies in the fall, so that in mid-March, he could remove the frames from the hot beds and the pansies would be big enough for transplanting to brighten yards with their colorful stepmother faces.

Mr. Busch helped me pick out the pansies one by one. He sat on a board placed diagonally across a corner and patiently waited while I looked over the dozens of plants in one bed. When I picked out one, he gave his approval with a slight German accent, “Yes, Buddy, that’s a nice one.” He scooped it out with his trowel and carefully placed it with just enough dirt in a shoebox. He kept the shoebox tilted so that the little plant with its dirt stayed in place. Then I chose another and then another. We moved to a different bed and again inspected dozens of plants. 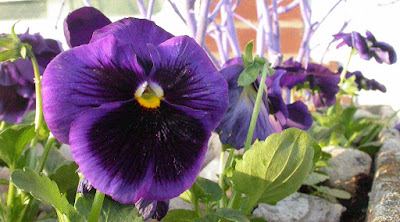 After we filled the shoebox with a dozen plants—they cost a nickel each, and I had sixty cents to spend—I walked up to the sales room at the back of the greenhouse, paid the clerk, and walked the four blocks home with my shoebox birthday gift of pansies. When I got home, Mom thanked me and planted her pansies in the concrete flower boxes at the front door so that all who passed by would see the bright, colorful faces of the “little stepmothers.”

Posted by Julianna Schroeder at 7:26 AM 2 comments: