How Dad’s Barbershop Was Integrated

Jefferson City was a racially segregated town all through World War II and the postwar years. Black people had to sit in designated rows in the back of movie theaters, could not enter certain businesses, were not served in restaurants, and went to their own schools from kindergarten through university. That’s the way it was . . . sad to say.

In our daily life, my family didn’t interact much with the black community, although quite a few black families lived scattered around Jefferson City’s Southside. My dad was a barber, and his shop was at 508 Madison (where the Central Motor Bank now is), directly across Madison Street from the Junior College (now the Miller Performing Arts Center). 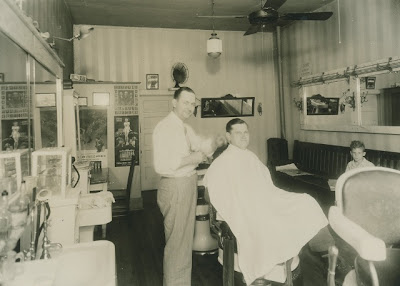 Mom and Dad taught their sons to be respectful of “colored people,” as they were then called, and we were. We had no reason to be otherwise. Dad had grown up in New Haven, Missouri, a small community of people of German descent, and told us how the colored people there, like the white people, spoke both English and German. I had a hard time imagining colored people speaking German. I suppose both Dad and Mom used the term “colored people” because that’s what their German-speaking parents called them in German, die Farbige.

Black soldiers returning in 1945 from fighting in World War II did not want to resume living in a segregated society, which clearly treated them as second-class citizens. They and the progressive faculty and students at Lincoln University were pushing to integrate Jefferson City well before the landmark national court decision of Brown vs. Board of Education in 1954.

Our family and others sensed that integration was coming to Jefferson City in those postwar years. The question was when and how. One evening at the supper table, where we discussed the day’s events, Dad was visibly worried. “Edna,” he said, as if this was a topic for her only and not for us boys, “they say that the colored people are going to force integration of the white businesses.” “Edna,” he repeated Mom’s name as if asking for help, “they are going to come to the barbershops and test them. What am I going to do?” Mom was quick and clear in her reply: “You cut their hair, of course!” “But Edna, I have never cut a colored man’s hair. Their hair is different. I just don’t know how. They never taught us how.” (“They” referred to Moler Barber College in St. Louis, where he learned barbering in the 1920s.) Dad was truly worried he would botch up their hair badly and trouble would follow. “Well,” Mom said, “you can tell them that, but you still have to invite them to sit in your chair to get a haircut.” In addition, Dad feared that some of his regular customers would stop coming if he accepted black men in his shop.

Days passed, and I forgot about Dad’s deep worry and fear. He was a perfectionist in cutting hair and wanted to do the right thing by the “colored people.” Then one evening, again at the supper table, came the result. Dad reported that two black men had come into his barbershop that morning, hung up their coats, took seats on the bench, and waited their turns without saying a word. When their turns came, Dad invited one to the chair with his usual smile, and the fellow stood up and politely replied something like, “Thank you, Mr. Schroeder, but we were just seeing if you would serve us. We have our own barbers.” Then the two men put on their coats and quietly left.

That’s all there was to it. Later, Dad and other local barbers got instructions from the union on how to cut black men’s hair, and he was better prepared when others came in. He did get a few black customers—men he already knew and who knew him—but there were plenty of black barbers in town to serve the town’s black men, and they depended on them for customers. Dad never reported that any of his white customers stopped coming because he was willing to cut the hair of black men.

The barbershop had been integrated!

Posted by Julianna Schroeder at 9:57 PM No comments: