In 1890 German immigrant Hugo Otto Busch and partner Charles Purzner bought Mathias Nagel’s florist and landscape business on the corner of Madison and East Dunklin. Nagel had been in business there since at least 1873. Busch bought out his partner in 1902 and expanded the business, calling it Capital City Greenhouse. In 1909 he purchased 25 acres of farmland between the 1400 blocks of St. Mary’s Blvd. and Missouri Blvd. to raise plants and flowers. That land today is occupied by Jefferson Plaza and Busch St. In the 1930s Busch had eight large greenhouses: six were on Missouri Blvd., and two were connected to the sales room on Madison Street. He had a total of 50,000 square feet under glass. Busch annually raised thousands of poinsettias, roses, and carnations for his business and for wholesaling. Busch’s Florist served the general public with cut flowers and bedding plants and also decorated for weddings, funerals, and church events and for state government functions at the Capitol and governors’ inaugurations. Busch’s began FTD service around 1920 and rose to rank among FTD’s national leaders. Busch’s has long been considered Jefferson City’s premier florist. 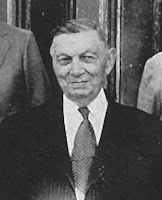 Hugo and his German immigrant wife Lina (Carolina Jung) lived at 117 East Dunklin (part of the business property), where they raised eight sons and two daughters. Six of the sons worked with their father at some time. Son Arthur began working in the 1930s and in 1955 assumed control of the business when his father died at age 89. Art and wife Leota were known for their personal attention to customers and for their friendly, skilled employees. Art died in 1990, and Leota continued until 1997, when the business left the Busch family after 107 years. John Pelzer then owned it, proudly continuing the name Busch’s Florist. The business is now owned by Reid Millard, who in 2018 has renovated the landmark greenhouse on “the most beautiful corner in Jefferson City.”

Hugo Busch was a founding member of Southside Boosters that formed in 1912 to promote the Southside. Busch’s Florist has been an anchor to its business community for more than a century and is an active member of the Old Munichburg Association.

This piece originally ran in the Jefferson City News Tribune.

Copyright 2018, by Walter A. Schroeder

Posted by Julianna Schroeder at 10:39 PM No comments: