When the German Methodist Church at Broadway and Elm closed in 1917, my Grandpa Albert Thomas, who lived next door, bought the vacant building without knowing what he was going to do with it. In the 1920s he rented it to his good friend and fellow German immigrant Fred W. Goldammer, who used it for a carpenter and general repair shop. Mr. Goldammer and family lived in a house on Swift’s Highway near where Helias High School now stands.

Grandpa and Mr. Goldammer (I always heard him called Herr Goldammer) were close friends. They both came to Jefferson City about the same time, attended the same church, and were about the same age. I imagine Grandpa, a carpenter himself, spent many hours with him in the carpenter shop talking and woodworking.

After Grandpa converted the church building into our residence and both he and Herr Goldammer had retired, they continued to visit each other. When Grandpa went to visit him on Swift’s Highway, he sometimes took me along. One of those trips was a summer morning in 1940, when I was six years old.

Our route was to walk south to the dead end of Broadway, the 1000 block, which was the entrance to the Evangelical Cemetery (since removed). It is the place where Highway 54 now passes over Broadway. At the end of Broadway we opened a gate in a fence and hiked across Affolter’s cow pasture. Affolter’s pasture since has become the Panorama Subdivision with Linden, Holly, and Laurel drives. We walked diagonally up the long hill to Swift’s Highway, across where Pamela and Darlene Streets now are.

As we walked through the pasture, we met many cows. Grandpa taught me how to greet cows in German. We went right up to a cow and looked her in the eye. Grandpa told me to greet her by saying, “Wie geht’s, Frau Kuh?” (How are you, Mrs. Cow?) As I greeted Mrs. Cow with those words, Grandpa told me I should also tip my hat, which was the German way to greet someone. He showed me how to touch the bill of my cap with my thumb and forefinger and lift it slightly off my head. We greeted several Mrs. Cows while walking through the pasture, so I got good practice in greeting Mrs. Cows. 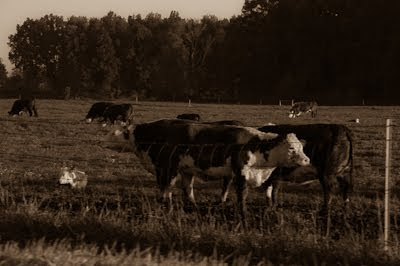 Grandpa and Herr Goldammer sat on straight-back kitchen chairs on the open back porch that was built around a cistern, and I sat on the thick concrete slab capping the cistern. The two old men smoked their pipes and spoke in German, but I couldn’t understand a thing they said. Frau Goldammer came out of the house and brought me a piece of apple pie on a saucer with a shiny fork and a glass of milk.

As I was sitting there eating, something happened that a six-year-old can never forget. Herr Goldammer bent over from his chair and placed a neatly folded white handkerchief on the concrete cover of the cistern right next to me. Then I looked up at Herr Goldammer just as he put his right thumb in the corner of his left eye and popped out his big glass eyeball. He bent over again and carefully laid it on the white handkerchief next to me, all the time continuing to talk.

I was afraid to look up at Herr Goldammer to see what he looked like without an eye in the socket. But his big glass eyeball just lay there next to me, staring up at me while I ate the pie. I couldn’t take my eyes off it! That motionless eyeball staring at me I can never forget, even seventy years later.

When it was time to go, Grandpa and Herr Goldammer bid each other “Auf Wiedersehen!” and we retraced our path through the pasture and again greeted several Mrs. Cows in the German way. We picked blackberries to take home, where I told Mom all about our expedition and Herr Goldammer’s glass eyeball.

Join the Old Munichburg Association, where you will find many other people with roots in Jefferson City’s historic German-settled district.

Posted by Julianna Schroeder at 5:30 PM No comments: