Simonsen High School was named for Ernst Simonsen in recognition of a gift of $5,000 given in 1914 to the Board of Education by his widow, Fredericka (DeWyl) Simonsen. (He is not to be confused with R. B. D. Simonson, a former superintendent. Incidentally, Mrs. Simonsen was the first woman to become a registered pharmacist in Missouri.)

Mrs. Simonsen also set up other funds for students at the high school (then grades 9–12). On May 12, 1947, Mrs. Simonsen gave an additional $2,000 for a public address system at Simonsen. It was one of the first intercoms in a Missouri school. In the fall of 1947 principal Ruie Doolin let students listen in classrooms to the Cardinals–Red Sox World Series championship games over the intercom, which the Cardinals won. That was before night baseball games. 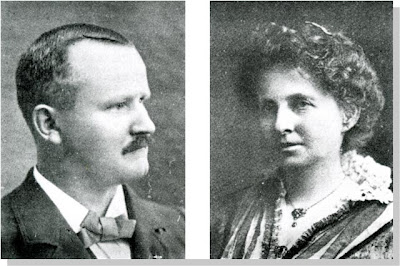 Ernst and Fredericka Simonsen. These photos appear in Jerena East Giffen, The House on Hobo Hill, p. 117 (see below).

In recognition of Mrs. Simonsen’s gift, school administrators arranged for the entire study body of Simonsen (then grades 7–10) to march later that same May to her house at the northern dead-end of the 600 block of Adams Street to thank her. (Her house is still standing, just across Adams Street from the current Public Schools Administration Building.)

A couple hundred students marched up Jackson, around the corner on Dunklin, and back up Adams to her house and stood in the street while the student body president presented flowers to Mrs. Simonsen. The school band played songs. The short ceremony of gratitude took place on her front porch. On signal, the couple hundred students in the street waved and shouted “Thank you” to the aged benefactress. Mrs. Simonsen died a few months later, in October 1947.

Posted by Julianna Schroeder at 7:13 PM No comments:

At the Old Munichburg Association’s January 2011 meeting, Phil Freeman and John Pelzer related how Southside business interests, when organized, can be very effective in accomplishing things.

Here’s some interesting history about the Southside Boosters, an earlier Southside business association, and its accomplishments, taken from Jefferson City newspapers before World War I. (Compiled by Walter A. Schroeder, 2/4/2011.)

The Southside Boosters organized in 1912 to promote the Southside. They met in Friemel’s beer garden atop the hill across from present Central Dairy. According to the newspaper on July 12, 1912, they discussed creating a new bank for the Southside (which was done), securing a policeman for the Southside, and improving the Munichburg fire department next to the brewery on the corner of Dunklin and Washington (not done).

They pushed to have Dunklin become a through street from one end of the city to the other, by cutting down the bluff in the 300 block of W. Dunklin and putting a street down the steep hill past Jackson to connect with Lincoln University and Clark Ave. (done). The city postmaster had already approved a branch post office for the Southside and was waiting for the Boosters to find a location for it (done).

In August 1912, the newspaper reported that farmer Wm. Ahlers was ready to build a $4,000-5,000 building for a creamery in the Southside. Also the Kocher brothers were going to move their cigar factory at 311 Commercial to the Southside, where they lived. 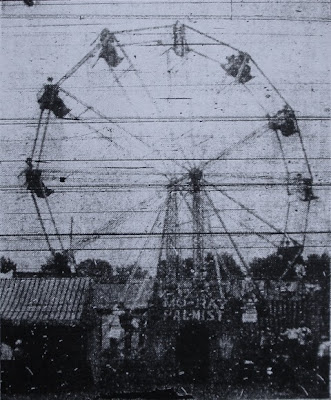 In September 1912, the Southside Boosters contracted with Greater Parker Shows for a weeklong carnival on Dunklin and surrounding streets. Billboards throughout the county advertised it. The carnival attracted large crowds.

It had a brilliantly lighted midway with impressive store fronts for sideshows, all decorated with numerous electric lights; numerous bands, including one big concert band that, after its concert at 7 p.m. broke up into smaller ones; artistic dancers, like “Pharoah’s Daughter”; mysterious illusions like the man who ate rats; a Ferris wheel so high that you looked down upon the buildings of Dunklin Street; Chefalo’s ride through a death-trap loop on a bicycle and leaping 40 feet away, on the corner of Ashley and Jefferson.

The newspaper warned, “Don’t play or shake hands with Madame Electricia or you will get shocked.” And “There is something about a steam calliope that you can’t get away from—maybe it’s the noise!” “One of the female performers is from Columbia and boys from Jefferson City who frequent Columbia recognize her.” Some High Street merchants were chagrined that they were outbid for the carnival by the Southside. 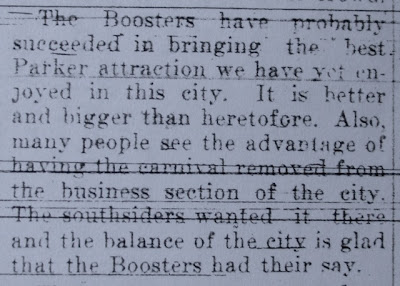 In October 1912, the Boosters wanted a planing mill for the Southside “because there is so much construction going on.” (For those of you too young to remember, a planing mill sawed lumber to specifications.)

In November 1914, plans were announced for a theater at 113 E. Dunklin. It would cost $12,000-15,000 and have a seating capacity of 1,000-1,200, with a floor drop of one inch to one foot that “will allow for good view of the stage everywhere.” This theater building, which was built with a balcony and a decorative terra cotta facade, is still standing. It is the one that Coleman’s Appliance just moved out of.

Ever since the Southside announced that it was going to boom and progress it has done so. Ever since the people organized a boosters club, the Southside organization has devised ways and means of making that section of the city the most important in the city. They want to attract people and so far have succeeded admirably.

In April 1915, the Southside decided it should have a “white way” like the one on High Street. [“White way” referred to the installation of electric lights along the streets and making them “white” at night.] To be along Dunklin from Madison to Broadway; 32 standards with 2 lights each, except at corners, where there would be 4 globes per standard. Next project would be to connect the Southside White Way with the High Street White Way along Madison Street.

The Southside asked that the Jefferson City street car company extend its line into the Southside proceeding up Monroe Street into the new Woodcrest subdivision (where Capital Region Medical Center now is).

Wouldn’t you like to help boost Jefferson City's historic southside neighborhood? Become a member of the Old Munichburg Association today!

Posted by Julianna Schroeder at 3:10 PM No comments: