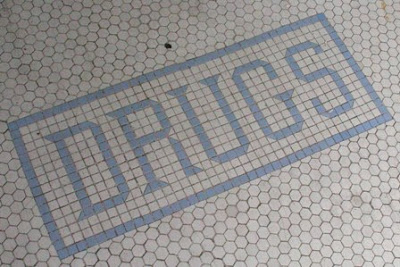 Posted by Julianna Schroeder at 4:23 PM

I believe my great aunt and great uncle, Laura and Victor Miller were the last to operate the South Side Drug Store. "Uncle Tic" was the pharmacist. They left Jefferson City and moved to Kansas City in the early fifties. I remember at least one summer when I was let off there to drink chocolate milk from the soda fountain and wait for the opening time for vacation bible school at Central Church. (This was before I was trusted to walk from my Mother's office at Employment Security)

Hi, Michael! I'm glad you found our blog! Thanks for commenting. I suspect there are several folks with Central Church/Southside Drugstore memories--my uncle, for instance, apparently played hooky there from Sunday School sometimes! Fortunately for him, the druggist was cool about it when the whole family stopped by the drugstore after church!

I grew up on Holly Drive (known as Panorama Hills at one time) very near the Southside. My mother grew up on Lafayette Street. I always wondered why our family had a seemingly inflated fear on hanging our arms out of a car window. This is the least of what I have learned on your website and I love your writing style.
THANK YOU.

I've heard so many stories like yours about warning not to hang your arm out the window, but they are all from boys. Why? Ferdie Artz did have an artificial arm, but only put in on when he was "going out on the town." WAS