Lots in the Southside’s Woodcrest Addition, between Monroe and Jackson streets and Hickory and Union streets, went on public sale in September 1914. The potential growth in this first platted addition to Jefferson City after cars became common prompted the Jefferson City School Board to consider opening a new elementary school there. The School Board purchased land for a new school in the 1200 block of Monroe. In 1919 Dr. Charles P. Hough donated four lots in the new Woodcrest Addition to the School Board for a playground, stipulating that it be named the “George W. Hough Playground” to honor his father. Hough also donated $1,500 for playground equipment. These four donated lots are on the southeast corner of Hickory and Adams streets. 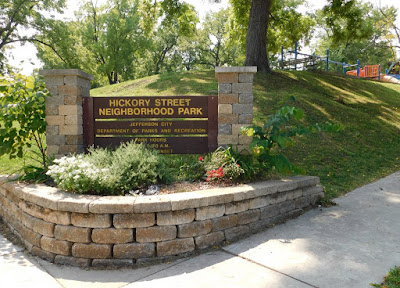 As the years passed, the School Board never built a school on the Monroe Street land and sold it in 1946 to the Missouri Osteopathic Association to build Still Hospital, which has since become Capital Region Medical Center. The School Board, however, did not sell its playground at the corner of Hickory and Adams—it conveyed it to the City of Jefferson for management as a neighborhood park, an arrangement that continued for many decades. Then, in April 2016, the Jefferson City School District, concerned with potential issues of liability, deeded the land to the City of Jefferson for $10 for continued use as a playground.

Now 99 years old, the Hickory Street Park is one of the oldest tracts of public land in Jefferson City specifically designated as a park. (Charles’s brother Arthur Hough donated the land for Hough Park in 1917.) The well-maintained, shady, popular playground in Jefferson City’s Southside is today a shining example of what a neighborhood park should be.

This piece originally ran in the Jefferson City News Tribune as an ad for Oktoberfest on September 16, 2018.