What Could Have Been: The Missouri State Capital in Sedalia

State commissioners located the site of the Missouri capital in the center of the state, on the Missouri River, and named it Jefferson City. That choice was a real winner for “centrality,” because two centuries later (2010 census) the center of Missouri’s population was just outside Wardsville, or only seven miles south of the Capitol. The center of Missouri’s geographic area is just west of Etterville in Miller County, 21 miles southwest of Jefferson City.

Over the years some Missourians have questioned the suitability of Jefferson City as the location of the state capital, and all would-be rivals were in the state’s central part. In the early decades of state history, Columbia, Fayette, and Boonville were proposed as better locations. But it was Sedalia that mounted the most determined effort to remove the capital from Jefferson City. 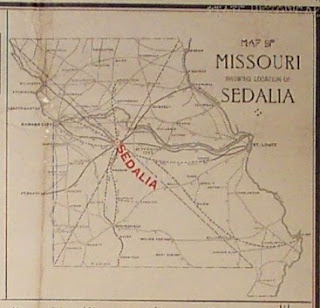 Sedalia had grown rapidly in the post–Civil War years, thanks to its railroad connections and development of the surrounding rich farming and stock-raising lands. In contrast, river-located Jefferson City grew more slowly after railroads superseded steamboats as the primary transportation mode. By 1890, Sedalia had more than double the population of Jefferson City (14,068 to 6,742), and promoters of that booming railroad town mounted a vigorous campaign to relocate the state capital to their town. 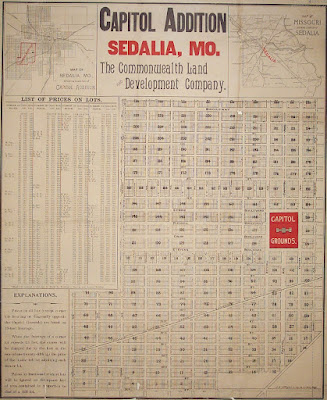 The Commonwealth Land Development Company of Sedalia, composed of those promoters, proposed a “Capitol Addition” in the southwestern part of the city. It was an irregular polygon of 211 square blocks that lay between Broadway on the north, 32nd Street on the south, and west of Barnett Street.

A tract of six square blocks was reserved for the Capitol and surrounding grounds. Locations were also designated for a Governor’s Mansion, a Supreme Court building, and an armory. A divided lane parkway, named Capitol Avenue, connected the Capitol to Sedalia’s chief thoroughfare, Broadway. Laid out in the days of horses and carriages, it was designed to be a ceremonial esplanade. 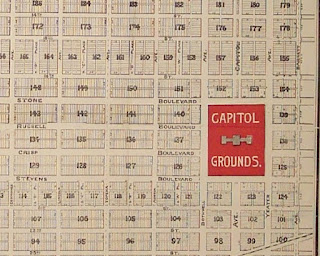 Apparently the entire addition was to be residential, since the company provided no information about land for commercial, industrial, or even neighborhood parks and churches. Capitol Addition comprised approximately 9,000 lots of different sizes, sufficient for more than 25,000 people. Most lots were only 25 feet wide! That narrow width allowed the promoters to maximize the number of lots in the addition, and thus the promoters would maximize the amount of money they would raise from sales. It was necessary to raise as much money as possible from lot sales because money raised from sales was to pay for the retirement of bonds sold to finance the capital removal, which was estimated to be a whopping $3,810,000 ($114,300,000 in 2022 dollars). For comparison, construction of the new Capitol and expanded grounds in Jefferson City in 1915 cost Missouri taxpayers less, $3,500,000 ($94,800,000 in 2022 dollars).

By means of clever parliamentary maneuvering, Sedalia was successful in getting passed a concurrent resolution in the Missouri state legislature requiring the state to vote at the general election in November 1896 on removal of the state capital—the Capitol building and all associated state functions—to Sedalia. Eighteen ninety-six was also the year the Missouri River bridge was opened, which greatly enhanced Jefferson City’s position. Despite Sedalia’s efforts, the statewide vote went solidly against removal by a vote of 65 percent to 35 percent. The initiative won approval in only 19 counties, most of which were around Sedalia.

Missourians could have had a capitol on uninteresting topography overlooking nothing but flat land. Instead, Missourians today are proud of their magnificent state Capitol rising majestically on a high bluff in Jefferson City overlooking our state’s namesake Missouri River.

Map courtesy of the State Historical Society of Missouri

Posted by Julianna Schroeder at 12:45 PM