Dunklin Street Closure Reminds Us It Wasn’t Always a Beeline

One thing we’ll remember about the summer of 2019 is the closure of West Dunklin Street! We’re glad the city’s making major improvements to the 300 and 400 blocks of Dunklin, including a new bridge over Wear’s Creek. But detouring around the construction zone has certainly grown wearisome! 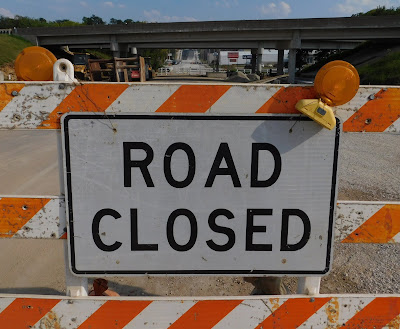 Few people know that until the 1920s, the Southside was shut off from both east and west sides of Jefferson City, because Dunklin stopped at each end. A steep hill on the east side of Jackson Street closed off access to Lincoln University, and a steep bluff west of Broadway and Wear’s Creek closed off access to the west.

But when cars came in and subdivisions sprouted up around the city center, something had to be done. Dunklin was selected to become the Southside’s major through street. The steep hill in the 500 block of East Dunklin was graded down and paved to handle cars. Likewise, the bluff in the 300 block of West Dunklin was graded down and paved, and a substantial bridge was built across Wear’s Creek in the 400 block. These two street improvements simplified access to the emerging Fairmount Boulevard and Moreau Drive neighborhood on the east, and to the emerging Washington Park neighborhood, along the new US 50 (now Missouri Blvd.), to the west.

When city buses replaced streetcars in the 1930s, they joined thousands of local drivers in using the new beeline that Dunklin offered—and which we have missed using this summer. It’s easy to see why this summer’s improvements to Dunklin are necessary. Not only is Dunklin the Southside’s “main street”—it’s a critical east-west connector in Jefferson City.

This piece originally ran in the Jefferson City News Tribune as an ad for Oktoberfest on September 22, 2019.

Posted by Julianna Schroeder at 3:38 PM