Jefferson City’s popular Firley YMCA, at 525 Ellis Boulevard on the southern edge of the Southside, recently reopened after serious damage from the tornado of May 22, 2019. Most people don’t know that Jefferson City’s first YMCA was organized in the Southside (then called Munichburg) on November 2, 1881, at Central Evangelical Church, now Central United Church of Christ. At the time, it was a German-speaking congregation, so its YMCA was called the Christliche Jünglingsverein der Evangelischen Central Gemeinde (Young Men’s Christian Association of Evangelical Central Congregation). It was affiliated with the national YMCA organization. 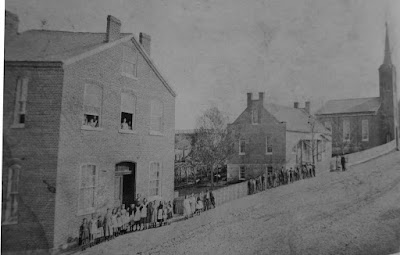 The Central Evangelical Church's school (left, shown in 1881) was the home of Jefferson City's first YMCA.

It was common for German American churches to be among the first Midwestern sponsors of YMCAs, perhaps because of the German penchant for calisthenics and exercise, and for forming organizations. Membership began after confirmation at age 13 and lasted until age 30, when one became a honorary member. The organization’s constitution had rules, with cash fines, on attendance, language, and smoking (prohibited during singing and praying).

In keeping with the congregation’s openness to those of other faiths, Central’s YMCA included young men from other local congregations, including English-speaking ones. It also included members from families of all socioeconomic levels and thus was an “equalizer.” By 1895 the YMCA had 66 members but lost its affiliation with the national organization because it began to accept young women. The name was then changed to Christlicher Jügendverein (Christian Youth Organization).

Central’s YMCA was briefly resurrected in 1920, when the church’s Men’s Association authorized the YMCA to sign the contract with Brunswick to construct a bowling alley. By that time, the congregation had switched to English. Central’s YMCA disappears from the record not long after and was replaced by several youth groups.

©Walter A. Schroeder, 2019, with information from the Central UCC archives
Photo illustration from CUCC archives and from Harold Horstmann and Mrs. Gus Schwartz Sr.

Posted by Julianna Schroeder at 3:58 PM