The tornado of May 22, 2019, wasn’t the first to hit Jefferson City. Just after 6 p.m. on Sunday, April 18, 1880, a tornado struck nearby Cole County and the far west side of town. The injuries and ruin it caused were described in the Peoples Tribune and the Evening State Journal. The quarter-mile-wide tornado ravaged the Centertown, Elston, and Scruggs Station neighborhoods and continued as far east as the present Jaycees Fairgrounds, Country Club, and Capital Mall.

Lengthy newspaper accounts named forty families and individuals affected by the tornado, detailing their injuries and property damage. About twenty-five frame and log homes were damaged or destroyed. Farm animals were killed or blown away, orchards were downed, and people were hurled from their homes as far as forty feet. A house was blown onto the Missouri Pacific tracks, and a train crashed into it in the dark, nearly killing the engineer and fireman.

One of the tornado’s frightened survivors was eighteen-year-old Nannie Pollock, who lived with her parents and sisters on a farm near present-day Turnberry Drive (just west of the Country Club). Eleven years later in 1891, when she married John C. Renner and moved to Jefferson City’s Southside, she insisted that the house he was building for them, at 218 West Elm, have double-thick brick walls. She wanted it to be able to withstand a tornado! 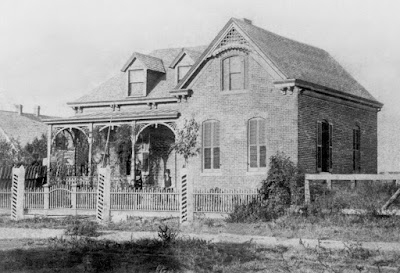 That solidly built 1891 brick house with extra-strong walls is still standing, 128 years later, testimony to a young woman scarred by the terrible 1880 tornado on the west side of Jefferson City.

©Walter A. Schroeder, 2019, with information from Pat Renner Schroeder

Posted by Julianna Schroeder at 4:09 PM